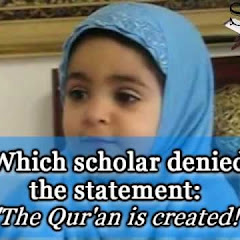 ''Then He Istawâ (rose over) towards the heaven and made them seven heavens and He is the All-Knower of everything.'' [2:29]

They claim in their attack (p. 5) that Allah said: "Do you feel secure that He (Allaah), who is above the heavens, will not cause the earth to sink with you[?]" (67:16) and this is a clear example of the manipulation of the literal meanings of the Holy Qur'an, which does not say "above the heavens" (man fawq al-samawat) but "in the heaven" (man fi al-sama'): see for example Pickthall or Yusuf Ali, which are the translations universally recognized and accepted by English-speaking Muslims, and also Shakir and Daryabadi:

PICKTHALL: Have ye taken security from Him Who is in the heaven that He will not cause the earth to swallow you when lo! it is convulsed?

YUSUF ALI: Do ye feel secure that He Who is in heaven will not cause you to be swallowed up by the earth when it shakes (as in an earthquake)?

SHAKIR: Are you secure of those in the heaven that He should not make the earth to swallow you up? Then lo! it shall be in a state of commotion.

DARYABADI: Are you secure that He Who is in the heaven willk not sink the earth with you, and then it should quake?


Malik in his Muwatta' and Muslim in his Sahih relate that Mu`awiya ibn al-Hakam came to the Prophet and told him: "I am very newly from the Jahiliyya, and now Allah has brought Islam," and he proceeded to ask about various Jahiliyya practices, until at last he said that he had slapped his slave girl, and asked if he should free her, as was obligatory if she was a believer. The Prophet requested that she be brought, and then asked her, "Where is Allah?" and she said, "In the sky (fi al-sama')"; whereupon he asked her, "Who am I?" and she said, "You are the Messenger of Allah"; at which he said, "Free her, for she is a believer."

Is there anything more clearer than that?
If you say: ''but Allaah doesnt actually mean that He rose over the heavens.'', well, let me tell you one thing, who gave you permission to make tafseer of the Quran? No one.
Muhammad saws never said anything about it and he is the most correct in any aspects of Islam, nor did the great scholars whom made tafseer of the Quran say anything about it. So please do not say anything without knowledge.

Now the answer to the question about the Prophet's birthday:

Did any of the imaams -- Abu Haneefah, Maalik, al-Shaafi'i, Ahmad, al-Hasan al-Basri, Ibn Seereen -- do this or command others to do it or say that it was good? By Allaah, no! It was not even mentioned during the first and best three centuries.
If you are saying: ''It is good, what is wrong with it? its not bid'ah I only do it because I love the Prophet and it takes me closer to him in love!'' then you must know that every little thing we can do to come closer in love to our beloved Prophet he would have told us to do it!
So please, love the Prophet by obeying him, not disobeying him.